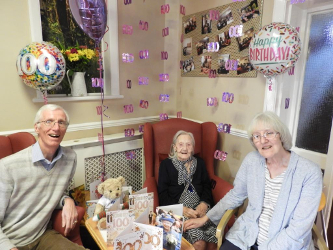 This is the Case study of Barbara Sayers by her Son and Daughter in Law. (May 2019)

My mum Barbara has been at Chestnut Court since March 2017, we are very happy with how well she has settled and she has just celebrated her 100th birthday.  We didn’t think we would get to the point where mum is settled and living near us especially after the journey we went on.

Mum was always a stubborn independent lady; I think it had something to do with living in London during the war. Mum had her first hip replacement when she was 92 years following an accident where she slipped on the ice one morning outside her house and broke a hip.

Breaking her hip didn’t stop her going back to her home in Bromley where she lived alone. Once home, she carried on without any support, even still getting on the bus to go shopping and refusing to use a shopping trolley because “that’s for old people”.

Living in Lymington we would try and get to see mum as often as we could but most of our contact was done by phone. It was on one of the occasions I called mum but didn’t get an answer we were obviously very concerned and soon learnt mum had suffered another fall and fractured her other hip, this was at the age of 96.

This is when our journey really began! I was very disappointed with the administration of mum’s discharge; I didn’t know they were planning to send her to respite until the day of her discharge whilst visiting her in Hospital

After my mother’s respite care was ending a meeting was held which we attended with mum and many professionals. They asked mum what she wanted to do and she said she wanted to go home. Mum lived in an old house, it didn’t have any central heating and had steps leading down to her dining room and her kitchen, no fridge/freezer and the toilet was upstairs. Mum was to receive carers at home but we needed to make sure the house was as safe as possible and purchased necessary equipment for the carers.

The first night mum was discharged from hospital we stayed in a hotel in London so we could be closer to her and received a call later that evening after we left at 5pm from the Carers stating they could not gain access as mum had locked the door from the inside and they left. When we got there next morning and looked through the letterbox, we could see mum lying on the floor, she had fallen and been there all night, she had broken her wrist and was hypothermic, we were told she had been very lucky to have survived. From her fall in November 2016 and subsequent hospital attendances appears to have brought on her Dementia.

We had another meeting with professionals at the Hospital who stated that my mother could go home again, and she would be well looked after. My wife and I were shocked that such a decision could be made after what had just happened with my mother having fallen again less than 24 hours after being home. We were insistent that my mother would go into a Care Home and that we would pay for it, but even so they tried to say everything would be OK.

We wanted mum nearer to us and started to look for homes which would be able to accommodate her and her needs. We viewed reports on the CQC website, picked a few and visited without making an appointment. Whilst some of these homes were very nice they either lacked the homeliness mum was used to or they were far too expensive.

“We turned up at Chestnut Court and we went in despite not being overly impressed with the outside”. We are so glad we did because what we saw and felt inside was a world away from our first impressions and we knew mum would be able to call Chestnut Court her home.

We met Becky the Registered Manager she couldn’t have been more helpful, she sorted everything for us, including the transport to get mum from Hospital to New Milton, she goes the extra mile.

I have nothing but praise for Becky, recently mum was in hospital and whilst Becky was visiting her own mum in hospital she took the time to visit mine. Becky organised mums 100th birthday celebration, arranging the entertainment,100s of balloons stuck to the ceiling in the Lounge, decorating her room and photographs taken by the local paper. Becky has framed the photo for mum, she goes above the call of duty.

Mum continues to amaze us in how independent and strong she is, she has been unwell several times and we have even been told to fear the worst by the GP and Becky but the very next day she was sitting up eating porridge!

We have met the owner Mr. Kumar he is a very nice man. We have recommended Chestnut Court to several people, we tell them not to be put off by the front door because it doesn’t reflect what’s inside. Since mum has moved in we have not turned back and have no regrets.